In the picture: the dog from next door, my gran, my mum, my ‘pop’

I don’t have a D-Day story to pass on, my parents were too young to fight

My dads’ dad would have been the right age, but he died in an accident at St Catherine’s Dock in the East End of London when my dad was a baby. My dad was evacuated (aged 6) from the East End during the war with his older sister to Lincolnshire, from where they promptly ran away, and back to London. My aunt was always an East End girl.

My mums parents were older, and in their 40s during the war. They were bombed out from their cafe near the docks in the East End and scraped enough together to buy a shop in a small, safe, village in Kent, my gran didn’t want her kids evacuated. There was a prisoners of war camp nearby – of mostly Italians, they would make things to sell, and sometimes come in for a coffee (Gran and Pop did a bit of everything to make ends meet). Gran serving the POWs was unpopular with the locals, but she would say they were ‘some mothers’ son’. One taught my mum to play the accordion. After the war they moved back to the East End, near the docks again in East Smithfield, selling ‘breakfasts, dinners and tea’ (see the picture) to the dockers until a compulsory purchase – to extend the Royal Mint – moved them on again, this time retiring to Southend-on-Sea (where we spent our summer holidays!).

On a topical note

Last year I was lucky enough to be commissioned by Catherine Jones of Cambridge to design a centennial logo to celebrate the end of WW1, remembering those who fell in Cambridge, especially those from the Royal Anglian Regiment. 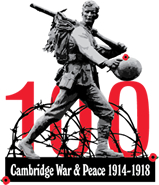 Design is not for philosophy, it’s for life – Issey Miyake