It’s just evolution – why you need an XX designer

As it’s International Women’s Day, here are a few thoughts on why you need a female (XX) designer in your business life…

We are designed for survival. Men hunted, so needed to be able to distinguish between predators and prey at distance. Women as mothers and foragers were better at close-range detail.

Our brains really are wired differently to problem solve. Look at the blue lines in the images below, they show a connection happening in one hemisphere. The first two are the male brain. It processes in order, in each hemisphere (intrahemispheric), indicating that it’s designed to facilitate connectivity between perception and coordinated action. The female brain, shown in the second two images below, uses the whole brain, working across both hemispheres (interhemispheric) to problem solve, indicating that it is designed to facilitate communication between the analytical and intuitive. Seeing the ‘bigger picture’, a woman’s intuition … 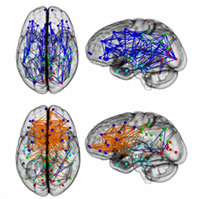 How the male and female brains work to problem solve

It’s a fact, women see the world in more colour. Not just pink, but salmon, peach, raspberry, cerise, magenta… Research has shown that male and female brains process colours in slightly different ways. For example, orange will appear redder to the man than to a woman, and greens look yellower to a man. And don’t forget, in this part of the world, a man has a 10% chance of being colour-blind to some degree. Take the test!

How men and women distinguish colours

read my other blog